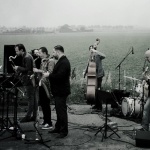 Muziekpodium Zeeland asked Jeroen van Vliet to write an updated version of the 1977 – concept of pianist  Cuypers: a tour with   current top-musicians through the province of Zeeland, recording a set of music in the open air in order to release a documentary film and cd. The project, executed september 2014 was very succesful and was performed in may, june and november 2015 throughout the Netherlands.
Plans are being made for more concerts in 2016. The DVD/CD of this group is available through this site. 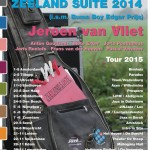